“I don’t eat much sugar”—really?

I came into the facial room to meet a new client, Cheryl. I went over her current skin care routine and any medications she might be on, especially the birth control pill. I asked if she took vitamins or herbs, did she exercise, drink water, and wear sunscreen? As soon as all the questions were answered, I began the facial.

After cleansing her skin, I brought my magnifying lamp over and peered through it at her face. The lamp magnifies about seven times, but in Cheryl’s case I really didn’t need the lamp. I could see from pretty far away that her skin was very broken out. She didn’t have pustules; her breakout consisted of those hard, red, deep-under-the-skin places. I could also see she was causing some damage from picking at her skin.

Instantly I knew she was ingesting way too much sugar, but I held myself back and proceeded to ask about her eating habits. I told her not to tell me what was good in her diet, but that I was interested in what she was eating regularly that wasn’t so good. The good, clean, healthy foods aren’t the troublemakers. Someone can tell me repeatedly about how much grilled chicken and vegetables they eat. Those foods are not causing their skin to break out, but something is.

I asked if she had much sugar in her diet. She responded the way most people do, “No, not really. Sure, I’ll have the occasional bite or two of a dessert I’m sharing with someone, but generally the only sugar I get is from fruit, like apples and oranges.” I asked about her menstrual cycles. Perhaps Cheryl’s skin problems were indicative of a hormone imbalance. “No, everything is normal,” she said in regard to her periods. So I was back on the sugar hunt.

To me, it seemed so simple: sugar was the culprit, yet she insisted she had very little in her diet, and in fact she ate very similarly to me—simple, clean foods. I explained to Cheryl that something was causing her breakout; it isn’t just happening for no reason and without explanation. And it is my job (and Cheryl’s) to decipher her lifestyle habits and figure out what was the offending edible substance.

All breakouts are hormonal. Hormones are little chemical messengers that tell your glands what to do. And in this case, it is the oil or sebaceous glands that are overproducing and causing problems. So to say that her breakouts were hormonal was true, but I wanted to find out why the hormones felt the need to exceed their normal and balanced dosage within her body.

Years ago a biochemist friend of mine told me that sugar can sometimes be a precursor to certain hormones in the body. I have absolutely no substantiated studies or clinical trials to back me up on this; I only have hundreds of clients who have been in my care for years who have stopped eating sugar and cleared up their skin. If the precursor theory is true, I would imagine it would be the androgens or male hormones that are being activated by eating sugar.

Since her periods were fine, I didn’t think it was a hormone imbalance causing her breakouts, so I went into my sugar speech. I started telling Cheryl about my own sugar addiction. I told her that I am so sensitive to sugar that if I ate just a small amount of sugar, but ate it every day, I would have a lot of breakouts consistently. Bingo. When I said the words “every day” it hit her. Every morning (or almost every day) Cheryl gets a coffee drink with a shot of vanilla in it. There it is. That vanilla syrup is essentially highly refined sugar—with vanilla flavoring. I told Cheryl that if I had one of those coffees with only one shot of vanilla every day for just one week, my skin, even in that short amount of time, would be a disaster.

According to myfitnesspal.com, 2 tablespoons of Starbucks vanilla syrup contains 19 grams of sugar. That is about as much sugar as you want in a day. It’s doubtful that 19 grams or so is all the sugar Cheryl was getting day to day. But even if it was, for sugar-sensitive people, that is enough to tip the scale and cause skin issues. For those (lucky people) who aren’t as sensitive, this coffee drink or its equivalent may not cause any problems.

We’d finally hit gold! We had something to work with, and now Cheryl could start taking control of her problem skin. I recommended she cut the vanilla shot out completely for at least one month to see if her skin did a turnaround. And it did. Admittedly, she also went on the products I recommended for her. But I know it was the sugar that in the end was causing her problems and that it was the avoidance of sugar that ultimately cleared up her skin.

Cheryl’s is a case where she really wasn’t ingesting a whole lot of sugar (if the coffee drinks were the only appreciable sugar she was getting daily); sometimes I do have clients who say they aren’t eating much sugar and, with further investigation, they really are. However this client does illustrate how sensitive to sugar some of us are—some more than others—and how taking out even small amounts of the sweet stuff can make a big difference in your skin.


For some eye-opening information, see: 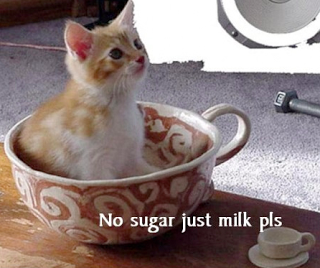